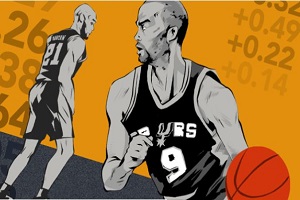 Next week, MIT will host the Sloan Sports Analytics Conference, a gathering of executives, researchers, and students focused on statistical analyses that are intended to better inform decision-makers (coaches, front offices, etc.) in a variety of sports.  Michael Lewis’ Moneyball first brought widespread acclaim to this movement in baseball.  This article introduces an entirely new basketball metric that relies on statistical approaches well beyond most of the models used currently.  Introducing “Expected Possession Value” (EPV):

On the quest for the perfect analytical device, the first discovery should always be the inescapable fact that there is no perfect analytical device.  There is no singular metric that explains basketball any more than there is a singular metric that explains life.  It’s hard not to improperly elevate the role of “big data” in contemporary sports analyses, but romanticizing them is dangerous.  Data are necessarily simplified intermediaries that unite performances and analyses, and the world of sports analytics is built upon one gigantic codec that itself is built upon the defective assumption that digits can represent athletics.

Still, the reality in 2014 is that Adam Silver’s NBA has cameras in the arenas measuring every player’s every move.  These stationary drones in the rafters are beaming gigabytes of potentially vital intelligence back to video rooms and practice facilities across the league.  Whereas just a few years back acquiring good data was the hard part, the burden now largely falls upon an analytical community that may not be equipped to translate robust surveillance into reliable intelligence.  The new bottleneck is less about data and more about human resources, as overworked analysts often lack the hardware, the software, the training, and most of all the time to perform these emerging tasks.

Early in the spring semester of 2013, Cervone and D’Amour proposed a new project to measure performance value in the NBA.  The nature of their idea was relatively simple, but the computation required to pull it off was not.  Their core premise was this: Every “state” of a basketball possession has a value.  This value is based on the probability of a made basket occurring, and is equal to the total number of expected points that will result from that possession.  While the average NBA possession is worth close to one point, that exact value of expected points fluctuates moment to moment, and these fluctuations depend on what’s happening on the floor.

Furthermore, it was their belief that, using the troves of SportVU data, we could — for the first time — estimate these values for every split second of an entire NBA season.  They proposed that if we could build a model that accounts for a few key factors — like the locations of the players, their individual scoring abilities, who possesses the ball, his on-ball tendencies, and his position on the court — we could start to quantify performance value in the NBA in a new way.  In other words, imagine if you paused any NBA game at any random moment.  Cervone and D’Amour’s central thesis is that no matter where you pause the game, that you could scientifically estimate the “expected possession value,” or EPV, of that possession at that time.

The overall contribution of the EPV project remains unknown; it is in its infancy and is by no means going to “revolutionize” basketball analysis.  But perhaps it will eventually fuel a new supplementary approach to assessing performance in the NBA.  Maybe it won’t, and its contribution will be less about figuring out true player value and more about simply raising awareness about the kinds of thinking, computation, and analysis that are required to really generate new basketball insights going forward.  For years, we have talked about “advanced stats” when what we were really talking about was slightly savvier arithmetic.  That’s going to change, whether we want it to or not.  Don’t get me wrong — metrics like points per possession and PER have significantly improved the analytical discourse surrounding basketball.  Still, there’s a tremendous amount left to do.  And given these vast haystacks of newfangled player tracking data, we’re in desperate need of similarly newfangled needle-extraction techniques. 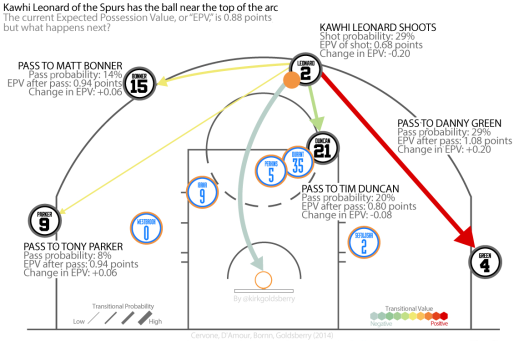 Click here for more from Grantland
Back to C&B Notes