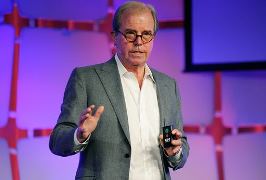 One Laptop per Child is trying a new strategy to reach some of the 100 million first-grade-aged children worldwide who have no access to schooling.  The organization is experimenting by simply dropping off tablet computers with preloaded programs in two remote Ethiopian villages to see if children will figure out how to use them to teach themselves.  In an unexpected twist, it did not take long for the kids to hack the device’s operating system.

The goal: to see if illiterate kids with no previous exposure to written words can learn how to read all by themselves, by experimenting with the tablet and its preloaded alphabet-training games, e-books, movies, cartoons, paintings, and other programs.  Early observations are encouraging, said Nicholas Negroponte, OLPC’s founder, at MIT Technology Review’s EmTech conference last week.

Earlier this year, OLPC workers dropped off closed boxes containing the tablets, taped shut, with no instruction.  “I thought the kids would play with the boxes.  Within four minutes, one kid not only opened the box, found the on-off switch … powered it up.  Within five days, they were using 47 apps per child, per day.  Within two weeks, they were singing ABC songs in the village, and within five months, they had hacked Android,” Negroponte said.  “Some idiot in our organization or in the Media Lab had disabled the camera, and they figured out the camera, and had hacked Android.”  Elaborating later on Negroponte’s hacking comment, Ed McNierney, OLPC’s chief technology officer, said that the kids had gotten around OLPC’s effort to freeze desktop settings.  “The kids had completely customized the desktop — so every kids’ tablet looked different.  We had installed software to prevent them from doing that,” McNierney said.  “And the fact they worked around it was clearly the kind of creativity, the kind of inquiry, the kind of discovery that we think is essential to learning.”