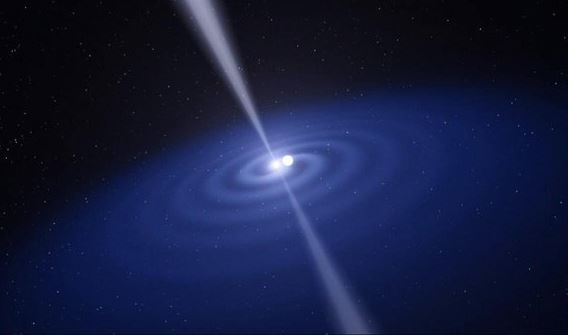 If a theory is actually true instead of convenient, it explains events in the limits.  Using a pair of massive stars (a large neutron star and a compact white dwarf star) that are orbiting one another as an extreme case study of gravity, a group of scientists have found that Einstein’s theory of relativity holds up even in these intense conditions.

The gravitational field created by the pulsar is so strong that the scientists suspected they might notice deviations from the predictions of general relativity in the motions of the white dwarf around it.  General relativity posits that massive objects warp the space and time around them, causing other objects, and even light, to travel along curved paths when they pass nearby.  General relativity also predicts that a close binary system such as this one will radiate gravitational energy in the form of ripples in space-time called gravitational waves.  This loss of energy would cause the orbital period of the system to change slightly over time. Alternative theories of gravity offer slightly different predictions for the white dwarf’s motions.

“Our radio observations were so precise that we have already been able to measure a change in the orbital period of 8 millionths of a second per year — exactly what Einstein’s theory predicts,” said Paulo Freire, another team member at the Max Planck Institute.

Scientists know general relativity, proposed by Albert Einstein in 1915, isn’t the complete story. While it does very well describing large, massive systems, it’s incompatible with quantum mechanics, which governs the physics of the very small.  For something extremely small, yet extremely massive — such as a black hole — the two theories contradict each other, and scientists are left without a physical description.  Rare systems like this binary star pair offer a chance to probe the boundary between the two theories, and search for possible openings toward new physics that could reconcile them.

“We thought this system might be extreme enough to show a breakdown in general relativity, but instead, Einstein’s predictions held up quite well,” Paulo Freire, an astronomer at the Max Planck Institute for Radio Astronomy in Germany, said in a statement.

Click here for more from NBC.com
Back to C&B Notes