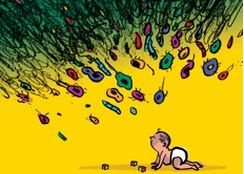 Thanks to the Human Microbiome Project (which was the follow-up to the DNA-sequencing Human Genome Project), scientists are starting to better understand human microbiomes, which are the systems of microorganisms (mostly bacteria) that are found in and around each of our bodies.  One of the key findings of this research is that many of the microbes that were previously thought to only have negative effects actually play a key positive role for human health.  The result is that simplistic healthcare assumptions are giving way to more nuanced understandings of what makes and keeps us healthy.

We inherit every one of our genes, but we leave the womb without a single microbe.  As we pass through our mother’s birth canal, we begin to attract entire colonies of bacteria.  By the time a child can crawl, he has been blanketed by an enormous, unseen cloud of microorganisms — a hundred trillion or more.  They are bacteria, mostly, but also viruses and fungi (including a variety of yeasts), and they come at us from all directions: other people, food, furniture, clothing, cars, buildings, trees, pets, even the air we breathe.  They congregate in our digestive systems and our mouths, fill the space between our teeth, cover our skin, and line our throats.  We are inhabited by as many as ten thousand bacterial species; these cells outnumber those which we consider our own by ten to one, and weigh, all told, about three pounds — the same as our brain.  Together, they are referred to as our microbiome — and they play such a crucial role in our lives that scientists like Blaser have begun to reconsider what it means to be human.

The passengers in our microbiome contain at least four million genes, and they work constantly on our behalf: they manufacture vitamins and patrol our guts to prevent infections; they help to form and bolster our immune systems, and digest food.  Recent research suggests that bacteria may even alter our brain chemistry, thus affecting our moods and behavior.

The process of learning about our microbiome is in its early days, but even the most tentative results have begun to transform our understanding of human health.  Recently, a group at the University of Maryland School of Medicine identified twenty-six bacterial species that reside in the guts of members of the Old Order Amish sect — a closed population, with a nearly identical gene pool — that seem to account for common metabolic abnormalities such as high blood pressure and insulin resistance.  Similar research has suggested that the destruction of bacteria may contribute to Crohn’s disease, obesity, asthma, and many other chronic illnesses.  “The prospects here are endless,’’ Blaser said.  “We need to be careful with the science and not oversell it.  But I have been a practicing physician and medical researcher for more than thirty years, and this is the most exciting and important work of my lifetime.”

In 2009, Blaser joined with the Stanford microbiologist Stanley Falkow to write an essay titled “What Are the Consequences of the Disappearing Human Microbiota?,” which was published in the journal Nature Reviews Microbiology.  It has been cited often, largely because the two provided a compelling answer to their own question.  For the past hundred and fifty million years, nearly all mammals have acquired their microbiome by passing through their mother’s vagina, which is colonized by an enormous range of bacterial species.  Babies delivered by Cesarean section lack many microbes that are routinely transferred from mother to child.  Last year, nearly a third of the four million children born in the United States were delivered by Cesarean section.  (In China, the figure was closer to fifty per cent.)  The incidence of allergies and asthma is far higher among those children than it is for vaginal-birth babies.  Moreover, this loss of microbial diversity appears to be cumulative.  “The way we live now, we are losing these organisms, and each generation arrives with fewer than the one before,’’ Blaser said.