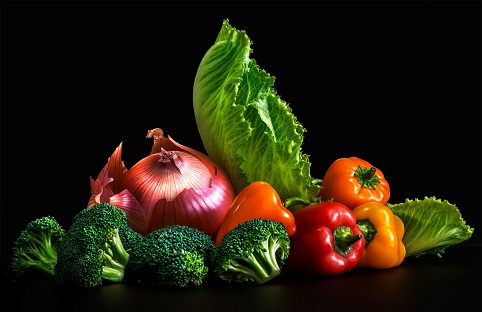 Given genetically modified foods’ unpopularity and questionable economics, Monsanto is using traditional crossbreeding to create fruits and vegetables with characteristics attractive to both consumers and grocers — longer shelf/drawer life, an array of serving sizes, higher antioxidant levels, crisper texture, etc.  They are, however, using modern tools and processes to significantly quicken the development of these foods.

“Grocery stores are looking in the produce aisle for something that pops, that feels different,” Avery says.  “And consumers are looking for the same thing.”  If the team is right, they’ll know soon enough.  Frescada lettuce, BellaFina peppers, and Beneforté broccoli — cheery brand names trademarked to an all-but-anonymous Monsanto subsidiary called Seminis — are rolling out at supermarkets across the U.S.  But here’s the twist: The lettuce, peppers, and broccoli — plus melon and an onion, with a watermelon soon to follow — aren’t genetically modified at all.  Monsanto created all these veggies using good old-fashioned crossbreeding, the same technology that farmers have been using to optimize crops for millennia.  That doesn’t mean they are low tech, exactly. Stark’s division is drawing on Monsanto’s accumulated scientific know-how to create vegetables that have all the advantages of genetically modified organisms without any of the Frankenfoods ick factor.  And that’s a serious business advantage.  Despite a gaping lack of evidence that genetically modified food crops harm human health, consumers have shown a marked resistance to purchasing GM produce (even as they happily consume products derived from genetically modified commodity crops).

Now, breeding new strains of plants is nothing new.  Quite the opposite, in fact — optimizing plants for yield, flavor, and other qualities defined the earliest human civilizations.  But for all the millennia since some proto-farmer first tried it, successfully altering plants has been a game of population roulette.  Basically, farmers breed a plant that has a trait they like with other plants they also like.  Then they plant seeds from that union and hope the traits keep showing up in subsequent generations.  They’re working with qualities that a biologist would call, in aggregate, phenotype.  But phenotype is the manifestation of genotype, the genes for those traits.  The roulette-like complications arise because some genes are dominant and some are recessive.  Taking a tree with sweet fruit and crossing it with one that has big fruit won’t necessarily get you a tree with sweeter, bigger fruit.  You might get the opposite — or a tree more vulnerable to disease, or one that needs too much water, and on and on.  It’s a trial-and-error guessing game that takes lots of time, land, and patience.  The idea behind genetic modification is to speed all that up — analyze a species’ genes, its germplasm, and manipulate it to your liking.  It’s what the past three decades of plant biology have achieved and continue to refine.  Monsanto became a pioneer in the field when it set out to create Roundup-resistant crops.

…Genetically modifying consumer crops proved to be inefficient and expensive.  Stark estimates that adding a new gene takes roughly 10 years and $100 million to go from a product concept to regulatory approval.  And inserting genes one at a time doesn’t necessarily produce the kinds of traits that rely on the interactions of several genes.  Well before their veggie business went kaput, Monsanto knew it couldn’t just genetically modify its way to better produce; it had to breed great vegetables to begin with.  As Stark phrases a company mantra: “The best gene in the world doesn’t fix [bad] germplasm.”

What does?  Crossbreeding.  Stark had an advantage here: In the process of learning how to engineer chemical and pest resistance into corn, researchers at Monsanto had learned to read and understand plant genomes — to tell the difference between the [bad] germplasm and the gold.  And they had some nifty technology that allowed them to predict whether a given cross would yield the traits they wanted.  The key was a technique called genetic marking.  It maps the parts of a genome that might be associated with a given trait, even if that trait arises from multiple genes working in concert.  Researchers identify and cross plants with traits they like and then run millions of samples from the hybrid — just bits of leaf, really — through a machine that can read more than 200,000 samples per week and map all the genes in a particular region of the plant’s chromosomes.

They had more toys too.  In 2006, Monsanto developed a machine called a seed chipper that quickly sorts and shaves off widely varying samples of soybean germplasm from seeds.  The seed chipper lets researchers scan tiny genetic variations, just a single nucleotide, to figure out if they’ll result in plants with the traits they want — without having to take the time to let a seed grow into a plant.  Monsanto computer models can actually predict inheritance patterns, meaning they can tell which desired traits will successfully be passed on.  It’s breeding without breeding, plant sex in silico.  In the real world, the odds of stacking 20 different characteristics into a single plant are one in 2 trillion.  In nature, it can take a millennium.  Monsanto can do it in just a few years.  And this all happens without any genetic engineering.  Nobody inserts a single gene into a single genome.  (They could, and in fact sometimes do, look at their crosses by engineering a plant as a kind of beta test. But those aren’t intended to leave the lab.)  Stark and his colleagues realized that they could use these technologies to identify a cross that would have highly desirable traits and grow the way they wanted.  And they could actually charge more for it — all the benefits of a GMO with none of the stigma.