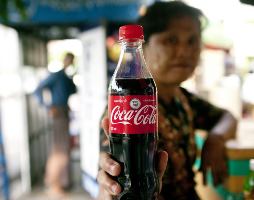 The Burmese have a sweet tooth when it comes to their drinks, but because Coke has been more or less unavailable for 60 years most consumers are unfamiliar with the beverage.  This unique situation, at least in post WW-II times, makes for an interesting real-time case study.

For years, there were only three countries in the world that didn’t officially sell Coca-Cola: Cuba, North Korea and Myanmar, formerly known as Burma.  Now, after 60 years, Coke is back in Myanmar.  Sanctions were lifted last year on the country.  Just this week, Coca-Cola opened its new bottling plant outside of Yangon.  Now all the company has to do is figure out a way to sell all that Coke to people who may not remember what it tastes like.

Shakir Moin (the head of marketing for Coke in Southeast Asia) first visited Yangon, Myanmar’s largest city, last summer, when the U.S. government announced that it would start loosening restrictions on doing business with the country.  The Myanmar government had made progress in human rights, and become a little more democratic.  But when Moin arrived in Yangon, he could see that the country hadn’t made much economic progress.  “It was literally like a trip back in time,” Moin says.  “There were very few cars.  There was no cell phone connection.  Internet was only available at the hotel.”  Moin had been running marketing campaigns in the rest of Asia that included mobile advertising, social networks, and ads in video games.  Now he had to sell to a place where the electricity went out every day, a place where people rarely even watched TV.

Moin says he started to go back in the Coca-Cola archives.  He was looking at how the company marketed its product before the internet, before TV, even before radio.  Eventually he found his perfect model for Myanmar, a place where nobody knew anything about Coke — Atlanta, 1886.  Back then the hot advertising trend was wall posters. Moin noticed that in the beginning, Coke didn’t use the posters to talk about friends or happiness or style.  It talked about what the product tasted like. It simply described it.  Moin pulled out two words in particular that would form the core of his Myanmar campaign — “delicious, refreshing.”  Those two words from the 1800s are now on the Myanmar bottle, and on the billboards and fliers that advertise the product.

Moin also uses the bottle to tackle that other big problem: the perception that Coke is for the upper class. In the center of every label is the price of the product, 300 Kyat, about 32 cents.  Coke almost never does this.  It lets the retailer set the price, but this time, they were convinced that stores would just continue to sell Coke at a huge mark-up unless they put the price on the bottle.

Coke is now the same price as its rivals, which sprung up during the era of sanctions, Max Cola and Star Cola.  Pepsi is back in the country too.  So far though, Coca-Cola seems to have a edge.  Part of their market research showed that people in Myanmar respect things that are the oldest.  They like the original version.