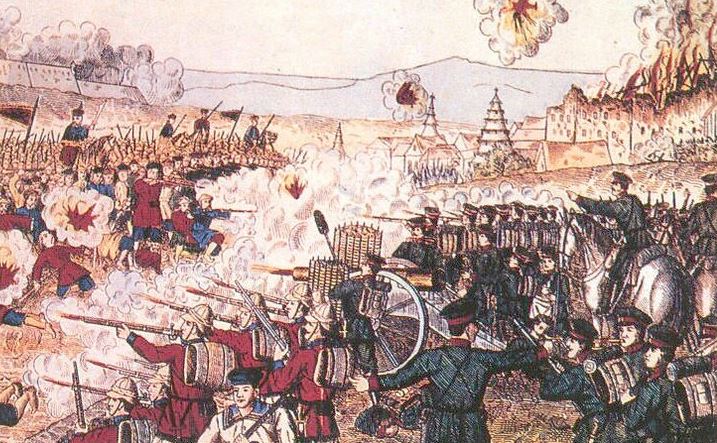 As China’s economy slows, should we expect the Chinese people to suffer it calmly like the Japanese have since 1991, or should we look to Chinese history to frame expectations?  Elements of China’s populace have revolted many times in the last two centuries including the Boxer Rebellion around 1900, the collapse of the Qing Dynasty and subsequent revolution in 1911, and Mao Tse Tung’s victory in the civil war over Chiang Kai-shek and the Kuomintang Party.  The Taiping Rebellion in the middle of the 19th century claimed more than 20 million lives making it deadlier than World War I.

The Taiping Rebellion was a massive civil war in southern China from 1850 to 1864, against the ruling Manchu Qing dynasty.  It was a millenarian movement led by Hong Xiuquan, who announced that he had received visions, in which he learned that he was the younger brother of Jesus.  At least 20 million people died, mainly civilians, in one of the deadliest military conflicts in history.

Hong established the Taiping Heavenly Kingdom with its capital at Nanjing.  The Kingdom’s army controlled large parts of southern China, at its height ruling about 30 million people.  The rebel agenda included social reforms such as shared “property in common,” equality for women, and the replacement of Confucianism, Buddhism and Chinese folk religion with their form of Christianity.  Because of their refusal to wear the queue, Taiping combatants were nicknamed “Longhairs” by the Qing government, which besieged the Taiping armies throughout the rebellion.  The Qing government eventually crushed the rebellion with the aid of French and British forces.   In the 20th century, Sun Yat-sen, founder of the Chinese Nationalist Party, looked on the rebellion as an inspiration, and Chinese leader Mao Zedong glorified the Taiping rebels as early heroic revolutionaries against a corrupt feudal system.

China, under the Qing Dynasty in the mid-19th century, suffered a series of natural disasters, economic problems and defeats at the hands of the Western powers; in particular, the humiliating defeat in 1842 by the United Kingdom in the First Opium War.  The Qing government, led by ethnic Manchus, were seen by much of the Chinese population, comprising mainly Han Chinese, as an ineffective and corrupt regime.  Anti-Manchu sentiment was strongest in the south among the laboring classes and it was these disaffected who flocked to join the charismatic leader Hong Xiuquan, a member of the Hakka community, a Han-Chinese sub-group that inhabited southern China but traced their ancestries back to the northern Jurchen people of the Jin Dynasty and before.  Having arrived too late to acquire the best land, they were engaged in constant conflicts, culminating in the Punti–Hakka Clan Wars.

At the age of thirty-seven, Hong Xiuquan failed on multiple occasions to pass the imperial examinations (of those who attempted the examinations, only about 5 percent passed) which consequently denied him access to the ranks of the ruling scholarly elite.  Hong experienced a lengthy illness and then after spending many days in bed, he recovered with a changed personality.  His cousin Li Ching-fang noticed the pamphlet Hong had received from a Protestant Christian missionary in 1836 after his failed attempt at the imperial examination on a bookshelf inside Hong’s house.  After reading it Li suggested that Hong should read the material.  After studying the material, Hong Xiuquan claimed that the illness he had following his imperial examinations was in fact a vision to the effect that he was the younger brother of Jesus, who was sent to rid China of the “devils,” including both the corrupt Manchu rulers and the teachings of Confucius.  After this vision, he felt it was his duty to spread his interpretation of Christianity and overthrow Manchu rule.  Hong’s associate Yang Xiuqing was a former firewood merchant from Guangxi, who claimed to be able to act as a voice of God, in order to direct the people and gain political power.  American Baptist missionary Issachar Jacox Roberts became a teacher and an adviser to Hong. The sect’s power grew in the late 1840s, initially by suppressing groups of bandits and pirates. Persecution by Qing authorities spurred the movement into a guerrilla rebellion and then into  widespread, bloody civil war.

Click here for more from Wikipedia
Back to C&B Notes