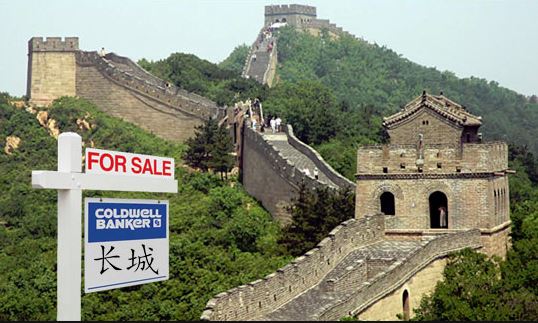 The real estate market in China is starting to show cracks as period-over-period prices sequentially decline.  It isn’t clear when the apparent property bubble might burst as centralized intervention seeks to prevent that outcome, but a sustained price correction would have a major impact on global GDP growth.

China’s new-home prices fell in July in almost all cities that the government tracks as tight mortgage lending deterred buyers even as local governments eased property curbs.  Prices fell in 64 of the 70 cities last month from June, the National Bureau of Statistics said today, the most since January 2011 when the government changed the way it compiles the data. Beijing prices fell 1 percent from June, posting the first monthly decline since April 2012

“It’s still uncertain where the housing market will go in the next two months,” Jinsong Du, a Hong Kong-based property analyst at Credit Suisse Group AG, told Bloomberg Television today.  “But at least the downward trend on housing transactions may not continue because of seasonality as well as because of the supporting measures.”

Both the official and private data point “to a steep correction in residential real estate prices whose depth begins to match that in the Lehman crisis,” Dariusz Kowalczyk, senior economist at Credit Agricole SA in Hong Kong, said in an e-mailed note.  “We expect new measures to stimulate the economy in a targeted way to be announced in the near term.”

Existing-home prices declined 0.8 percent in Beijing in July from a month earlier and dropped 0.9 percent in Shanghai, according to the data.  Home sales fell 28 percent in July, the biggest monthly drop this year, the government reported earlier this month.