China’s home prices have extended their recent declines despite efforts by the PRC to expand credit by both loosening mortgage standards and lowering required bank reserves.  Developers are under increasing pressure, and the balance sheets of regional/municipal governments are also overburdened. 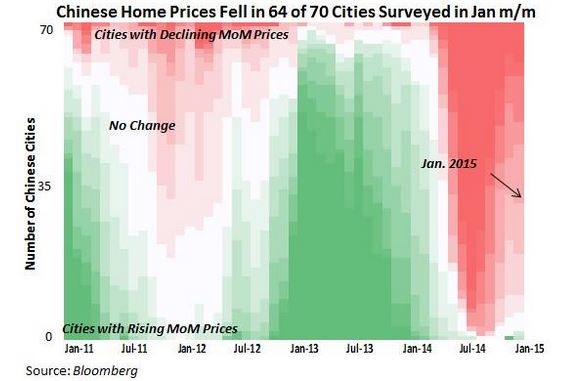 The average price of new homes in 70 Chinese cities fell at a slightly faster monthly pace in January amid sluggish demand from home buyers, despite officials’ moves to loosen mortgage rules and ease lending.  The decline in home prices also continued to widen in January on a yearly basis, according to data issued by the National Bureau of Statistics Tuesday.  Home prices in first-tier cities fared better than those in smaller ones, as looser mortgage rules and more accommodative monetary measures lure home buyers back to the market. Late last year the central bank cut benchmark interest rates and early this month it lowered the amount of reserves banks have to set aside, a measure designed to encourage banks to increase lending.

But uncertainties still plague the Chinese property market.  Many smaller Chinese cities are struggling with high inventories and property developers face tighter cash flow and narrowing margins.  Prices in January slipped 0.43% on month, compared with a 0.40% fall in December, according to calculations by The Wall Street Journal.  The fall in January follows four consecutive months of modest month-on-month improvements.  The average price of new homes declined 5.1% in January on year, compared with a 4.3% fall in December.  Excluding public housing, private-sector home prices fell in 69 of the 70 cities in January from a year earlier, compared to 68 cities that posted declines in December.  Home prices fell in 64 of the 70 cities last month on a monthly basis, down from December’s 66.