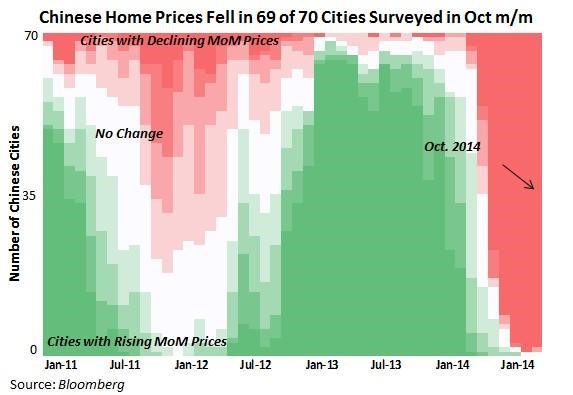 We exited our only investment in China nearly five years ago, but we continue to follow the overall credit picture in the country and the broad impact it could have on global growth.  China remains the most interesting piece of the global macroeconomic puzzle.  The cracks range the full spectrum from continued month-over-month declines in residential real estate prices to excessive private guarantees (effectively cross-collateralization) for C&I loans to completely unoccupied retail malls.  It remains to be seen whether this week’s rate cut will stem a decline or further inflate a bubble.

When a fabric company called Jiangyin Xueyuan Textile Co. collapsed, the troubles soon cascaded through other firms in this mill town.  A machinery maker, paper producer, manufacturer of faux-wood flooring and textile maker had one thing in common. They had promised, in the event of default, to repay the loans taken on by Xueyuan. Court documents say the fabric company can’t pay what it owes.

With China’s economic growth flagging, businesses such as Xueyuan are foundering.  And these chains of guarantees, in which companies back loans to other firms, are causing pain for the wider Chinese economy.  The central bank cut benchmark lending and deposit rates on Friday to reduce financing costs for companies and help revive growth…

Guarantees played a large role in fueling China’s rapid debt expansion over the last six years. About a quarter of the $13 trillion in total outstanding loans as of the end of October was backed by promises from other companies, individuals and dedicated guarantee companies, often undercapitalized, to pay up if the borrower defaults.  Lenders outside the traditional banking systems — so-called shadow bankers — also embraced guarantees, seeing them as a way to assure nervous investors that their funds were secure and to circumvent government restrictions on lending to certain types of businesses.

Reliance on these guarantees is now backfiring, regulators and analysts say, resulting in a surge of bad loans that banks had assumed were insured and threatening financial contagion.  The China Banking Regulatory Commission said in a notice to banks in July that bankruptcies in these “guarantee chains” could “trigger regional financial crises.”

China is unusual, some experts say, in that the role of guarantor falls to individual firms.  Having one company guarantee a loan for another worked well enough until growth began ebbing in 2012, the first extended slide the economy had seen since the late 1990s.  “Early on, everything was fine because China had never seen an economic slowdown, so a guarantee was nothing more than a rubber stamp,” said Dragon Tang, an associate professor of finance at the University of Hong Kong.“  But now the guarantors really have to pay.”

The guarantees gave banks a false sense of security and an excuse not to scrutinize the borrowers’ ability to pay, some analysts and banking executives say.  In some places “risk prevention relies excessively on third-party guarantees…to the extent that the guarantee is the main basis on which credit decisions are made,” Wei Guoxiang, chief risk officer at Industrial & Commercial Bank of China  Ltd., wrote in the June issue of China Finance, a publication backed by the central bank. 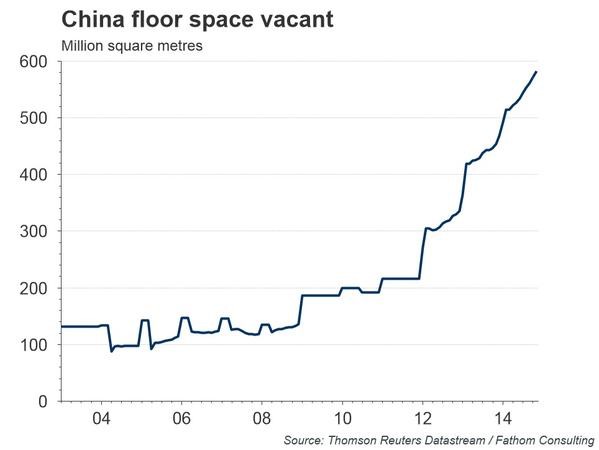