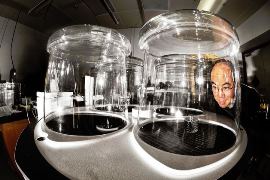 The exact weight of a kilogram is currently standardized using a hunk of platinum-iridium alloy, which is about the size of a golf ball and sits in a vault in Paris. The kilogram is the last fundamental unit of measure defined by a physical object, so scientists are working to express it in a way that does not deteriorate.

The platinum-iridium kilograms have begun to vary in weight as they collect dust from the atmosphere, and regular steam cleanings aren’t enough to keep them all consistent.  It’s estimated that the kilograms are seeing an average “relative drift” from the international prototype of .5 micrograms a year.  That’s why the Swiss Federal Office of Metrology (METAS) issued a call for a new method, one that doesn’t rely on a physical object.  Teams of researchers are developing agnostic ways to measure the unit, including counting atoms and measuring against gravity.

Researchers at Mettler Toledo, a global maker of precision measuring instruments, have developed a tiny, ultraprecise weighing cell that allows for measurements accurate within .1 micrograms, significantly more precise than the 1 microgram requested by METAS.  Mettler Toledo is collaborating with Federal Institute of Technology in Lausanne (EPFL) and the European Organization for Nuclear Research (CERN) to develop the so-called “watt balance,” an experimental scale that will allow the kilogram to be measured electronically according to the voltage required to lift the prototype in an electromagnetic field.  The new weighing cell is a critical component of the watt balance.