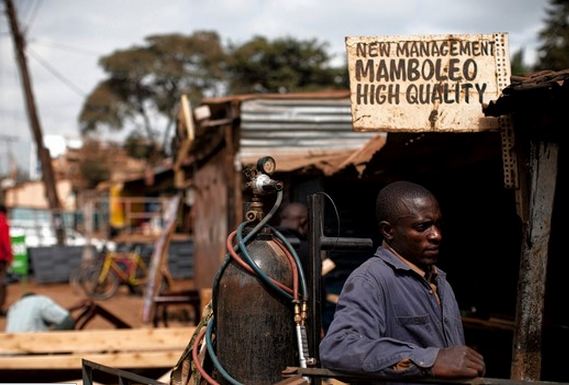 Equity Bank Group has built innovative solutions to address several of the problems that make microlending a difficult and often unprofitable venture.  We particularly enjoyed their ideas about and approaches to capital distribution (mobilizing multiple channels with relatively minimal up-front investment) and underwriting (nontraditional collateral and the involvement of the borrower’s social community).

At a recent group-lending meeting in the Kawangware slum, about 10 miles from downtown, Jackson Munyovi sought $350 to build a new shanty for his wife and two children.  The 31-year-old welder asked fellow church congregants and friends to co-sign a loan to finance building materials.  A church deacon vouched for the borrower’s assets, including a few metal-shop machines and his marital bed, and Mr. Munyovi promised to repay the loan in six months, plus 8% interest.  And with that, Equity Bank Group — one of Africa’s most ambitious banks — snagged another customer.

The Kenyan bank has enjoyed a booming business lending to people with little collateral beyond the potential disgrace of letting friends down.  Equity executives aren’t shy about a business model that leverages societal mores and shame — often the strongest collateral to be found on a continent where formal credit records are scarce beyond the biggest cities.  “If a woman secures a mortgage with her matrimonial bed, she will never default,” declares Chief Executive Officer James Mwangi.  “And other women will support her just to ensure that that matrimonial bed is not removed when the husband is not there.  Here, social relationships are more valuable than economic relationships.”

In this field, known as microlending, Equity executives say their main competition isn’t other banks — it is the bedroom mattresses where many Africans store their savings.  Nearly 90% of Equity’s customers are first-time bank clients, Mr. Mwangi said.  The unbanked represent about 80% of Africa’s adult population, or 326 million people, according to banking-industry estimates.  Most of those people are employed in Africa’s massive informal sector — a term describing an untaxed, unregulated part of the economy.