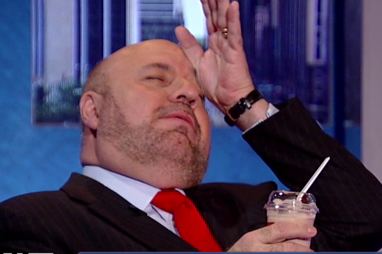 Scientists have discovered a creative way to use ‘brain freeze’ to explore treatments for migraine headaches:

Previous studies have found that migraine sufferers are actually more likely to get brain freeze than people who don’t get migraines.  Because of this, the researchers thought the two might share some kind of common mechanism or cause, so they decided to use brain freeze to study migraines.

Headaches like migraines are difficult to study, because they are unpredictable.  Researchers aren’t able to monitor a whole one from start to finish in the lab.  They can give drugs to induce migraines, but those can also have side effects that interfere with the results.  Brain freeze can quickly and easily be used to start a headache in the lab, and it also ends quickly, which makes monitoring the entire event easy.

The researchers brought on brain freeze in the lab by having 13 healthy volunteers sip ice water through a straw right up against the roof of their mouth.  The volunteers raised their hands when they felt the familiar brain freeze come on, and raised them again once it disappeared.

The researchers monitored the blood flow through their brains using an ultrasound-like process on the skull.  They saw that increased blood flow to the brain through a blood vessel called the anterior cerebral artery, which is located in the middle of the brain behind the eyes.  This increase in flow and resulting increase in size in this artery brought on the pain associated with brain freeze.

When the artery constricts, reining in the response to this increased flow, the pain disappears.  The dilation, then quick constriction, of this blood vessel may be a type of self-defense for the brain, the researchers suggested.

If other headaches work in the same way, drugs that stop these blood vessels from opening up, or that could make this blood vessel constrict could help treat them, the researchers say.