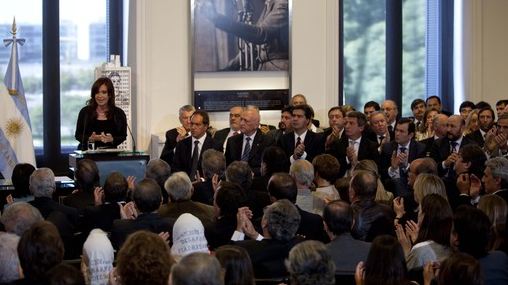 Argentina moved earlier in the week to effectively nationalize the country’s largest oil and gas company, YPF SA, which is currently majority-owned by the Spanish company Repsol YPF.  Cristina Fernandez’s government has blamed YPF for underinvestment that has contributed to the country’s current trade deficits and budgetary woes.

We have spent meaningful time on the ground in Argentina, and have observed the potential for business there if the country and its leadership showed better budgetary restraint and rule of law consistency.  The re-election of Fernandez, based on her first nearly year in office, certainly appears to have set the country back on both fronts.  Indeed, this expropriation move smacks of trying to fix structural fiscal issues with a short-term populist solution that creates greater long-term problems.  For example, (i) it calls into question the ‘rules of the game’ for investors and will likely decrease capital investment inflows into the country, (ii) this move is already inviting sanctions from Spain and the EU that could restrict trade and hurt consumers, businesses, and the government in the process, (iii) the ability of Argentina to even fully extract YPF’s value is in question as industry observers are not sure how the government is going to fund the up-front costs necessary to produce YPF’s reserves given that complementary businesses must naturally also fear expropriation of their investments.  Over the last half century, Argentina has systematically squandered its position as one of the leading economies in the Western Hemisphere.

The nationalization marks the culmination of a months-long battle between YPF and the Kirchner government.  The administration blames YPF for low production that has forced Argentina to spend heavily for imported energy, at a time when it is enduring a scarcity of dollars due to capital flight.

YPF, which has maintained that the government’s own interventionist economic policies are to blame for the energy crunch, had no comment.

The nationalization appeared certain to spark an intense legal fight between the government and Repsol, while also straining the Kirchner government’s relationship with Spain, a big investor and trading partner.  In addition, the action is likely to further damage Argentina’s reputation among investors while adding tension to relations with the European Union.

“This sends a real negative signal to pretty much the entire world in terms of the rules of the game and investing in Argentina,” said Mark Jones, a political scientist at Rice University. Indeed, analysts question how Argentina will obtain the capital and expertise needed to develop YPF’s significant shale reserves, after its strong-arm move on Repsol.

Certainly Argentina has big potential.  Overall, Argentina ranked third in the world, behind China and the U.S., in potentially recoverable reserves of shale gas with 774 trillion cubic feet, according to a study last year by the U.S. Energy Information Administration.

But critics and industry officials say government policies such as high taxes, price caps on home energy rates and unpredictable rule changes like a suspension of tax breaks on production spending have discouraged investment.

“The government is now in a vicious circle in which it feels it must take increasingly extreme measures to try to resolve problems its own policies are creating,” said Aldo Abram, an economist in Buenos Aires.  “I don’t know where it stops, but this will not solve Argentina’s energy problem.”

Ever since declaring a default of its foreign debt in 2001, Argentina has been considered something of a renegade nation by the international financial community.  But analysts say that Mrs. Kirchner’s oil nationalization takes state economic dominance to a new level.