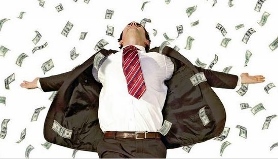 A new study suggests that hiring compensation consultants both raises executive compensation and provides an “independent” justification for doing so.  Incentives matter.

The authors conclude that

“…our study finds strong empirical evidence for the hiring of compensation consultants as a justification device for higher executive pay.”

So, be very suspicious of arguments that higher executive pay is the result of the “war for talent”, the unique importance of the CEO in a globalized world, or whatever.  If such arguments were true, it should make no difference whether consultants are hired or not.  This smacks more of the famous lickspittle courtier of Louis XIV, the Sun King, who, when asked the time, replied “It is whatever time your majesty pleases”.  “Whatever pay your majesty pleases” is the modern equivalent.