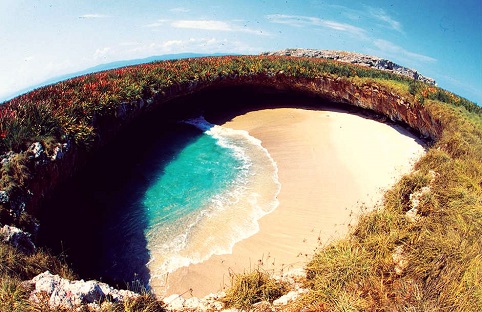 Although the issue is far from settled, a group of scientists have posited a new theory about the presence of water deep under the earth’s surface and the role it may have played in the origins of the world’s oceans.

After decades of searching scientists have discovered that a vast reservoir of water, enough to fill the Earth’s oceans three times over, may be trapped hundreds of miles beneath the surface, potentially transforming our understanding of how the planet was formed.   The water is locked up in a mineral called ringwoodite about 660km (400 miles) beneath the crust of the Earth, researchers say. Geophysicist Steve Jacobsen from Northwestern University in the U.S. co-authored the study published in the journal Science and said the discovery suggested Earth’s water may have come from within, driven to the surface by geological activity, rather than being deposited by icy comets hitting the forming planet as held by the prevailing theories.

“Geological processes on the Earth’s surface, such as earthquakes or erupting volcanoes, are an expression of what is going on inside the Earth, out of our sight,” Jacobsen said.  “I think we are finally seeing evidence for a whole-Earth water cycle, which may help explain the vast amount of liquid water on the surface of our habitable planet.  Scientists have been looking for this missing deep water for decades.”

Ringwoodite acts like a sponge due to a crystal structure that makes it attract hydrogen and trap water.  If just 1% of the weight of mantle rock located in the transition zone was water it would be equivalent to nearly three times the amount of water in our oceans, Jacobsen said.