A Quest Based on Curiosity 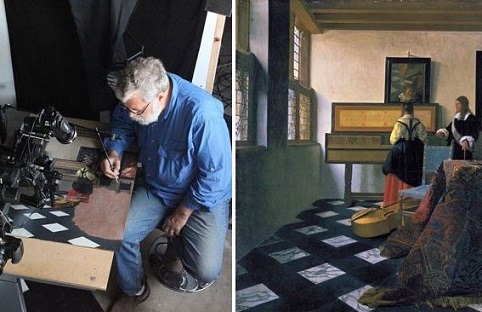 Driven by a deep curiosity encouraged by a career in video production, Texas inventor Tim Jenison has been trying to figure out whether Vermeer was aided by a camera obscura in the creation of his masterpieces.  The result was a painstaking process of re-creating the tools and setting of Vermeer’s time to try to resolve a scholarly argument that has been raging for some time.

However, the Hockney-Steadman theories were just that — theories, experimentally undemonstrated.  As the nay-saying historian James Elkins (of the School of the Art Institute of Chicago) observed in 2001, “the optical procedures posited in Hockney’s book are all radically undertested,” and “no one, including myself, knows what it is really like to get inside a camera obscura” — a lens projecting a perfect image of one side of a room onto a surface equidistant on the other side — “and make a painting.” Jenison decided to construct a version of a device that Vermeer himself could have built and used.  And since he had no training or experience as an artist whatsoever, he figured he was the ideal beta user of whatever he rigged up.

He was in no rush.  His R&D period lasted five years.  He went to the Rijksmuseum in Amsterdam.  “Looking at their Vermeers,” he says, “I had an epiphany” — the first of several.  “The photographic tone is what jumped out at me.  Why was Vermeer so realistic?  Because he got the values right,” meaning the color values.  “Vermeer got it right in ways that the eye couldn’t see.  It looked to me like Vermeer was painting in a way that was impossible.  I jumped into studying art.”  He traveled to Delft again and again, scouting the places where Vermeer had painted.  He learned to read Dutch.  He paid for translations of old Latin texts on optics and art.  Much later, he did a computer analysis of a high-resolution scan of a Vermeer interior, and discovered “an exponential relationship in the light on the white wall.”  The brightness of any surface becomes exponentially less bright the farther it is from a light source — but the unaided human eye doesn’t register that.  According to Jenison, the painting he digitally deconstructed shows just such a diminution from light to dark.

The Vermeer he decided to reproduce is The Music Lesson, 29 inches by 25: a girl at a harpsichord, her male teacher standing at her side, the Delft north light flooding the room through leaded-glass windows.  “My whole experiment was about getting the colors right.  Colors are all determined by the lighting in the room.  And The Music Lesson shows you the exact position of the windows.”  But the challenge was immense, because in order to reproduce the painting with the help of a camera obscura, Jenison would first have to build an exact reproduction of the room in the original painting, and of everything in it.