A New Class of Antibiotics 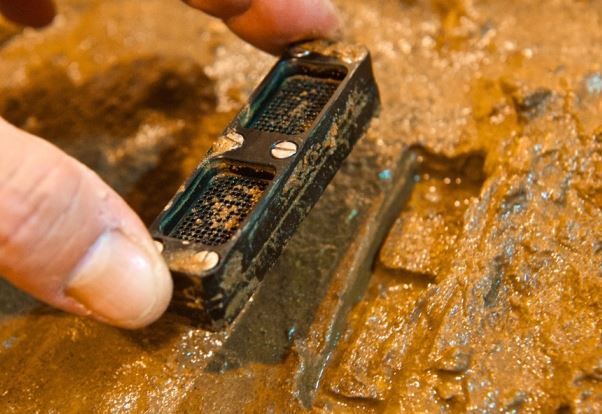 Given the growing resistance of bacteria to existing antibiotics, attempts to identify new ones are critically important.  A recent antibiotic discovery shows particular promise, and the in situ method used to find it is a breakthrough approach that has the potential to deliver many more antibiotics.

Many of the most successful antibiotics were found in the mid-twentieth century by scientists who trawled microbial communities for bacteria capable of killing their brethren. But the researchers missed the type that produces teixobactin, Eleftheria terrae, plus many other potential candidates — known collectively as microbial ‘dark matter’ — because of their reluctance to adapt to life on a petri dish.

Lewis and his Northeastern colleague Slava Epstein discovered E. terrae‘s potential with a device they call the iChip.  It works by sorting individual bacterial cells harvested from soil into single chambers.  The device is then buried back in the ground.  Several molecules in that environment are able to diffuse into the iChip, allowing the bacteria to thrive in a more natural setting than a petri dish.  Typically, only about 1% of microbes in a soil sample are able to grow in the lab.  The iChip expands that fraction to 50%.

The researchers then tested 10,000 of the resulting bacterial colonies to see whether any were able to halt the growth of S. aureus.  That search yielded 25 potential antibiotics, says Lewis, but teixobactin is the most attractive candidate so far.  Lewis is excited about teixobactin mainly because of the indication that it will be difficult for pathogens to develop resistance against it.  Unusually for an antibiotic, teixobactin is thought to attack microbes by binding to fatty lipids that make up the bacterial cell wall, and it is difficult for a bacterium to alter such fundamental building blocks of the cell.  By comparison, most antibiotics target proteins and it can be relatively easy for a microbe to become resistant to those drugs by accumulating mutations that alter the target protein’s shape.

It is impossible to say how well the results will hold up in the clinic, but teixobactin shows promise, says Wright.  “I don’t believe there’s such a thing as an irresistible antibiotic,” he says.  “But I do believe that certain antibiotics have a low frequency of resistance.”

Click here for more from Nature.com
Back to C&B Notes