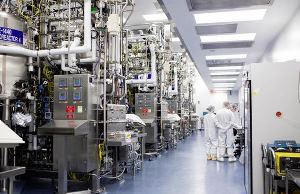 The race is on among three large pharmaceutical companies to translate the discovery of a rare gene mutation into a blockbuster cholesterol drug.  While the scientific discovery itself is intriguing, the story also highlights the brutal realities of the industry.  Huge up-front R&D costs in a highly competitive, strictly-regulated environment make the size and duration of future profits very difficult to project.

She was a 32-year-old aerobics instructor from a Dallas suburb — healthy, college educated, with two young children.  Nothing out of the ordinary, except one thing.  Her cholesterol was astoundingly low.  Her low-density lipoprotein, or LDL, the form that promotes heart disease, was 14, a level unheard-of in healthy adults, whose normal level is over 100.  The reason was a rare gene mutation she had inherited from both her mother and her father.  Only one other person, a young, healthy Zimbabwean woman whose LDL cholesterol was 15, has ever been found with the same double dose of the mutation.

The discovery of the mutation and of the two women with their dazzlingly low LDL levels has set off one of the greatest medical chases ever.  It is a fevered race among three pharmaceutical companies, Amgen, Pfizer and Sanofi, to test and win approval for a drug that mimics the effects of the mutation, drives LDL levels to new lows and prevents heart attacks.  All three companies have drugs in clinical trials and report that their results, so far, are exciting.  “This is our top priority,” said Dr. Andrew Plump, the head of translational medicine at Sanofi.  “Nothing else we are doing has the same public health impact.”

Dr. Gary H. Gibbons, the director of the National Heart, Lung, and Blood Institute, estimates that even if the drugs were expensive and injected as many as two million Americans might be candidates.  But if they could eventually be made affordable and in pill form — two very big ifs — they might be used by one in four adults, he said.  Despite major gains over the past half-century, heart disease remains the leading killer of Americans, causing nearly 600,000 deaths a year.  Statins, the cholesterol-lowering drugs that went on the market in 1987, were a huge breakthrough, but far from a panacea.

And there is another concern: cost.  Each company’s drug is a biologic, a so-called monoclonal antibody made in living cells at an enormous expense, like some new cancer drugs that are already straining the medical system.  Amgen plans to make metric tons of its drug, much more, the company says, than any other biologic.