A Brief History of Steel 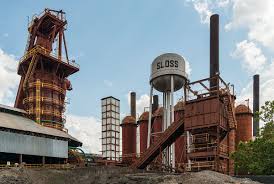 Birmingham, our hometown and the largest metro area in Alabama, was founded in the 1870’s and grew rapidly thanks primarily to a burgeoning iron and steel industry (a suburb of Birmingham is named after the Bessemer process).  Iron ore, coal, and limestone were all readily available in the area.  Over several millennia, steel production advanced through both big leaps and incremental improvements, changing the world in the process.

To know steel, we must first understand iron, for the metals are nearly one and the same. Steel contains an iron concentration of 98 to 99 percent or more.  The remainder is carbon—a small additive that makes a major difference in the metal’s properties.  In the centuries and millennia before the breakthroughs that built skyscrapers, civilizations tweaked and tinkered with smelting techniques to make iron, creeping ever closer to steel.  Around 1,800 BC, a people along the Black Sea called the Chalybes wanted to fabricate a metal stronger than bronze — something that could be used to make unrivaled weapons.  They put iron ores into hearths, hammered them, and fired them for softening.  After repeating the process several times, the Chalybes pulled sturdy iron weapons from the forge.  What the Chalybes made is called wrought iron, one of a couple major precursors to modern steel.  They soon joined the warlike Hittites, creating one of the most powerful armies in ancient history.  No nation’s weaponry matched a Hittite sword or chariot.

Steel’s other younger sibling, so to speak, is cast iron, which was first made in ancient China.  Beginning around 500 BC, Chinese metalworkers built seven-foot-tall furnaces to burn larger quantities of iron and wood.  The material was smelted into a liquid and poured into carved molds, taking the shape of cooking tools and statues.  Neither wrought nor cast iron was quite the perfect mixture, though.  The Chalybes’ wrought iron contained only 0.8 percent carbon, so it did not have the tensile strength of steel. Chinese cast iron, with 2 to 4 percent carbon, was more brittle than steel.  The smiths of the Black Sea eventually began to insert iron bars into piles of white-hot charcoal, which created steel-coated wrought iron.  But a society in South Asia had a better idea. India would produce the first true steel.

Around 400 BC, Indian metalworkers invented a smelting method that happened to bond the perfect amount of carbon to iron.  The key was a clay receptacle for the molten metal: a crucible.  The workers put small wrought iron bars and charcoal bits into the crucibles, then sealed the containers and inserted them into a furnace.  When they raised the furnace temperature via air blasts from bellows, the wrought iron melted and absorbed the carbon in the charcoal.  When the crucibles cooled, ingots of pure steel lay inside.

Henry Bessemer was a British engineer and inventor known for a number of unrelated inventions, including a gold brass-based paint, a keyboard for typesetting machines, and a sugarcane crusher.  When the Crimean War broke out in Eastern Europe in the 1850s, he built a new elongated artillery shell.  He offered it to the French military, but the traditional cast iron cannons of the time were too brittle to fire the shell.  Only steel could handle the controlled explosion.

The crucible steelmaking process was much too expensive to produce items as large as cannons, so Bessemer set out to find a way to produce steel in larger quantities.  One day in 1856, he decided to pour pig iron into a container rather than let it ooze into a trench.  Once inside the container, Bessemer blasted air through perforations on the bottom.  According to Steel: From Mine to Mill, everything remained calm for about 10 minutes, and then suddenly sparks, flames, and molten pig iron came bursting from the container.  When the chaos ended, the material left in the container was carbon-free, pure iron.

The impact of this explosive smelting incident is hard to overstate.  When Bessemer used the bellows directly on the molten pig iron, the carbon bonded with the oxygen from the air blasts, leaving behind pure iron that — through the addition of carbon-bearing materials such as spiegeleisen, an alloy of iron and manganese — could easily be turned into high-quality steel.  Bessemer built a machine to carry out the procedure: the “Bessemer Converter.”  It was shaped like an egg with an interior clay lining and an exterior of solid steel.  At the top, a small opening spewed flames 30 feet high when the air blasted into the furnace.

The Entire History of SteelFrom hunks of iron streaking through the sky, to the construction of skyscrapers and megastructures, this is the history of the world's greatest alloy.