ABI at the Onset of the Pandemic

ABI’s manifesto is, “Bringing People Together for a Better World.”  Obviously, social distancing conflicts with this sentiment.  The beer industry has been the most affected of our industries due to social distancing habits and regulations.  In some markets, the ability to do business has been temporarily suspended through varying restrictions on production, distribution, and/or sales of alcohol.  In most places, beer sales have been displaced as on-premise options (e.g., bars and restaurants) have been closed or changed, but off-premise options like supermarkets have remained open.  This slide from ABI’s first quarter earnings presentation outlines this situation in various markets: 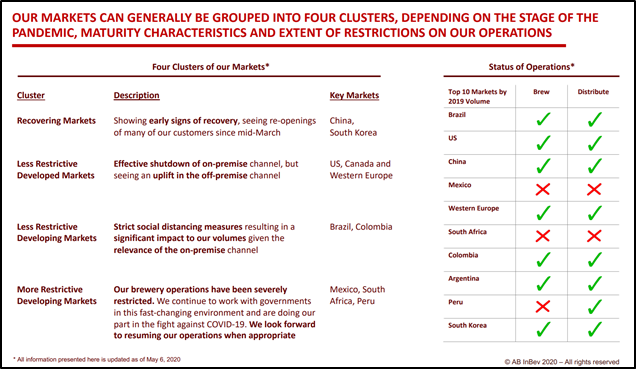 ABI is the world’s largest and most profitable brewer.  Most of ABI’s sales are made using its superior distribution network, an advantage that is particularly strong in emerging markets.  To understand both ABI’s long-run plans and the nearer-term impact of COVID-19, an investor should look at each market as a separate business.  In some markets, like Brazil and the United States, ABI is the market leader facing competitors seeking to steal some of its share of profits.  In other markets, ABI is the market leader but still gaining share from a strong number two, such as in Mexico.  In markets like Chile and Nigeria, ABI is stealing share and profitability from the current market leader.  While in places like China, ABI is growing fast as part of a rapidly expanding market.  The net result of these has been organic beer volume growth of 0.6%, 0.8%, and 0.8% in 2017, 2018, and 2019, respectively, despite a protracted recession in Brazil, ABI’s second biggest market.  After the impact of COVID-19, we expect volume growth to accelerate modestly, and profitability per hectoliter to expand through both premiumization and consumer acceptance of high-margin value offerings brewed from local grains.

China currently delivers about 9% and rising of ABI’s revenues.  In fact, more Budweiser is sold in China than in the United States.  The country’s hard lockdown in the first quarter had a severe impact on ABI’s business and offers some example of what the near future might hold for the overall business.  Volumes in China were down about 45% in the first quarter as the nightlife channel was closed for much of the time and consumer mobility was severely restricted.  Fortunately, the business is recovering.  By the end of April, 95% of stores, 85% of restaurants, and 25% of the nightlife channel had reopened.  April volumes were down 17% versus 2019 with business improving each week.

Since 2014, the Federal Reserve’s Trade Weighted U.S. Dollar Index (a measure of the strength of the U.S. dollar) has appreciated by more than 30%, including 7% appreciation so far in 2020.  Despite its diversified operations in more than 50 countries, ABI’s intrinsic value has been adversely impacted by the strength of the U.S. dollar relative to almost all other world currencies for three primary reasons:

In total and adjusted for acquisitions, ABI has reported cumulative revenue and operating earnings declines of 2% and 3%, respectively, from 2017 to 2019 due to cumulative negative FX headwinds of 7% and 9%. The global panic surrounding COVID-19 and the ensuing flight to safety has further strengthened the U.S. dollar, especially against currencies in large ABI profit-centers like Mexico, Colombia, Brazil, and South Africa.  If current FX rates persist for the remainder of the year, currency movements will be a 9% headwind to ABI’s 2020 reported revenues and a larger headwind to owner earnings.  While these headwinds are negative for ABI’s intrinsic value, two mitigants are worth mentioning.  First, ABI hedges its U.S. dollar-denominated costs on a rolling twelve-month basis, which eliminates operational risk to a strengthening dollar over this period. Second, a large portion of ABI’s cost structure is commodity-based (like diesel fuel and aluminum) which tends to be inversely correlated with the U.S. dollar. We have a general expectation (backed by market observations of inflation differentials) that over long periods of time the U.S. dollar will appreciate against a basket of currencies that match ABI’s markets.  The movement in the last few years, however, has been materially faster than the fundamentals imply and is well ahead of the long-term trend.  It is hard to know in real time how much of the currency move is an overshoot based on sentiment and how much is fundamental.  We do not expect the dollar to appreciate at the current rate in perpetuity.  Coca-Cola CEO James Quincey provided some interesting context during a July 2019 earnings call, “when you take a step back and you look at dollar cycles over the last 20 or 30 years, the current cycle is the longest one, it’s the longest one we’ve had […] and when you look at […] both the macro indicators over the next 12 to 24 months plus some […] of the political commentary that that has been in play around the world, it does point to us being at […] the high end of dollar strength.”

The U.S. dollar’s strength has a more noticeable effect on ABI’s results because ABI reports in dollars and do not hedge revenues (like Coca-Cola does, for example).  Except for our Peruvian businesses where the Peruvian sol has remained strong, all of our companies would benefit meaningfully if the U.S. dollar slowed its upward march.  The U.S. dollar’s purchasing power is very high in many of our countries, and market forces should begin to bring that to equilibrium.

We have stress-tested ABI’s balance sheet extensively against persistent volume drops larger than April’s decline of 32%, and ABI will survive even our most pessimistic forecasts.  ABI’s cash balance will exceed $20 billion when the sale of its Australia business is completed in June.  Its debt has an average interest rate of 4%, is termed out to an average of 15 years, and has no financial covenants.  In fact, ABI successfully accessed the debt markets in early April by issuing $11 billion in euro and U.S. dollar-denominated bonds that have maturities as long as 40 years.

Many of ABI’s costs are variable (barley, hops, labor, electricity, diesel, etc.) and fall with volume declines.  As a result, ABI will generate cash in 2020 even with the current large revenue declines.  While ABI should surpass 2019 levels of profitability in the next several years, the market currently values the business at eleven times the free cash flow it earned last year, eight times the free cash flow it earned in 2017, and nine times the dividends it paid in 2017.  We believe that is a wide discount to its intrinsic value.  We sold some shares in January at $80 per share and bought back a similar amount in March at $36 per share.  The Brazilian investors who founded 3G Capital and built ABI bought 1.1 million more shares last week at $42 per share.  Prospective returns are compelling from current price and valuation levels.  A broadly weakening U.S. dollar could create a lollapalooza result.